AS ABOVE, SO BELOW ¹

An experienced astrologer, familiar with the language of astrological symbolism, can look at the natal horoscopic chart of Isaac Newton and easily discern the primary features of the soul who bore that name, and recognize in these features the historical man; or he may look at the chart of Ralph W. Emerson and discern the soul tendencies impelling that kindly figure, and recognize, as by an interior photograph, the very blueprint of the man’s soul.  And likewise with every notable character with whom we are familiar: to those conversant with the language, each birthchart is a faultless portrait of the man or woman thus represented.  The charts are faultlessly accurate portraits because they represent the cosmic factors involved in the makeup of those souls in the space-time moment of their embodiment.  They stand, indeed, as illustrative proof of the interconnection of the soul’s qualities and the heavenly environment which accompanies its incarnation.

Those souls whose purpose sets them apart, whose aims are strong and focused upon the accomplishment of their destined role, are brought to birth in concert with the starry pattern that portrays their gathered wealth of wit or wisdom or vision or art.  All come into life at the intended moment, in concert with the perfect unfolding of the universal array in the Divine Mind and at the behest of the one all-encompassing Soul, which is its manifest activity.  “All things move together of one accord; assent is given throughout the universe to every falling grain.”  The positions and angular relationships of the planets, the necessity of the times, and the appearance of the souls of the great and small, all live and move and exist, entwined together, by that one assent, and of that one accord.

Here, then, let me present to you the planetary pictures at the birth of some well-known historical figures in chronological order.  I believe the cumulative effect of these examples will enable you to perceive and comprehend some of the wonders of the incomprehensible Soul and its creative diversity: ²

First, the soul of one of our early great scientists, Galileo Galilei.  Here, on the following  page, is the planetary chart of his birth.

If you are new to astrological symbolism, you will need to become familiar with the basic symbols; I will not be presenting a beginner’s course in astrological interpretation. Those who are already proficient will recognize at a glance the following major planetary aspects: 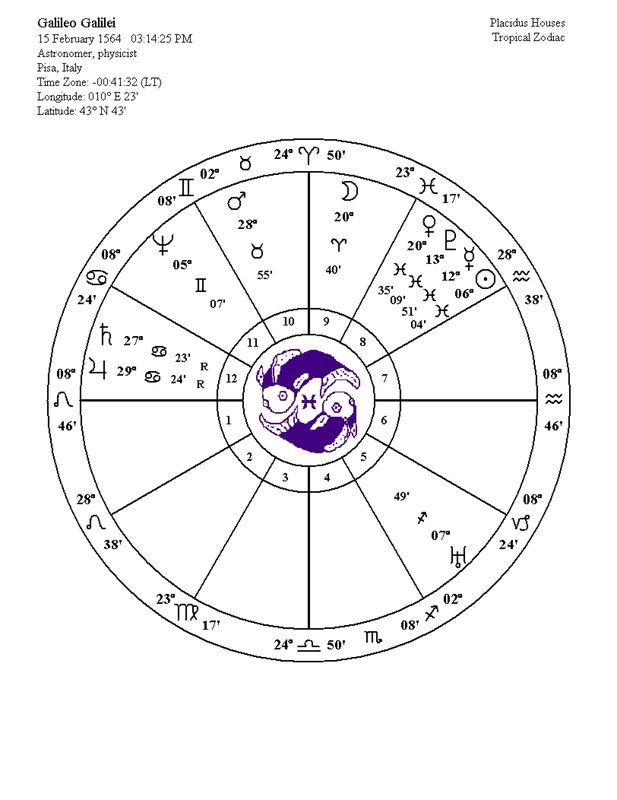 The next chart is that of the brilliant French philosopher, René Descartes:

One cannot help noticing at first glance that this is an extraordinary chart.  Firstly, The Sun, North Node, Uranus, Jupiter, and Pluto are conjunct in Aries; followed by Mercury, Venus, and the Moon conjunct in Taurus. The first multi-conjunction is in trine aspect to Neptune, and the second multi-conjunction is trine to Saturn; and the Jupiter-Pluto conjunction is sextile to Mars. How appropriate that the man responsible for Cogito ergo sum, “I think, therefore I am”, was born with many of his soul-characteristics in the astrological “I am” sign of Aries. 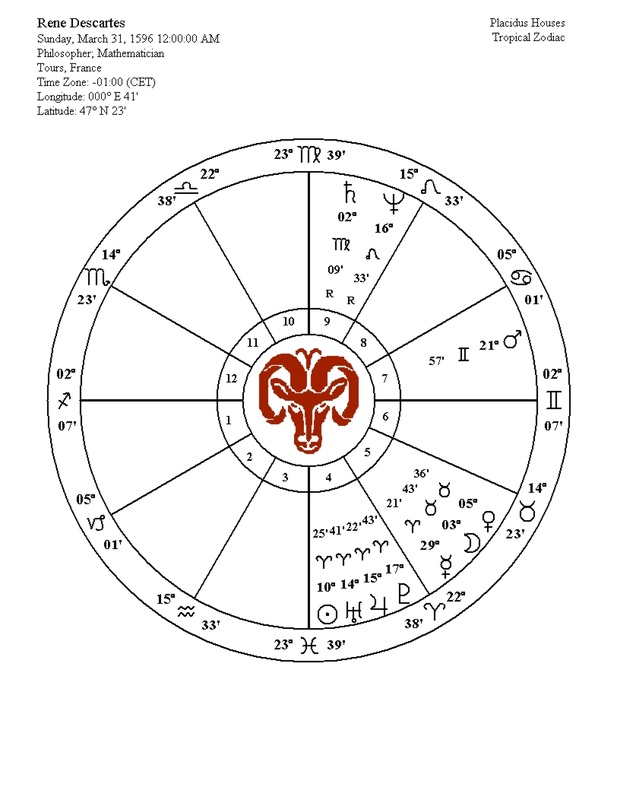 The next chart is that of famed musician, Wolfgang Amadeus Mozart: 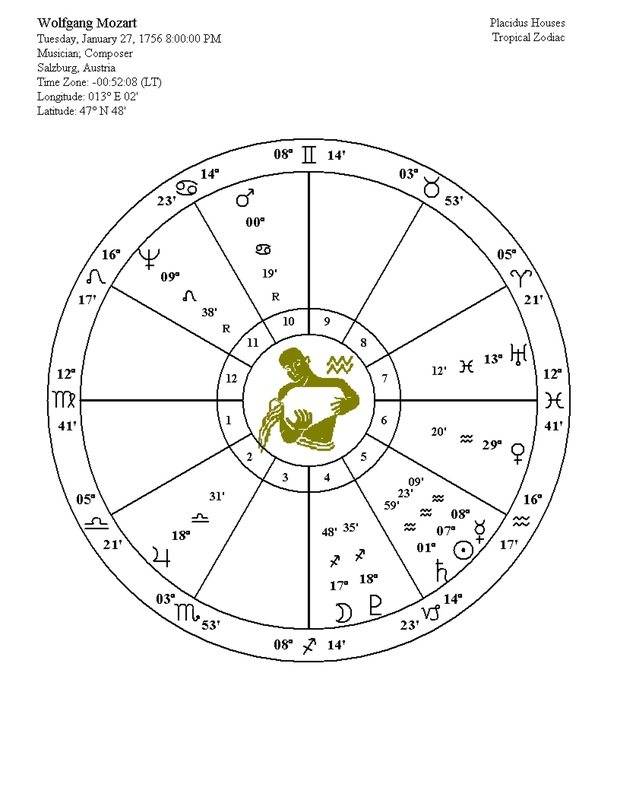 Beethoven’s chart is equally grand, containing the following major aspects: The Sun, Moon, and Mercury conjunct in Sagittarius; The Moon and Mercury are trining Saturn, and squaring Neptune; Mars is conjunct the South Node; but most spectacular is the Grand Trine between Uranus, Neptune, and Pluto, only one of which was discovered during his lifetime: Uranus was discovered by Herschel in 1781, but of Neptune and Pluto Beethoven knew nothing.  Neptune was not discovered until 1846, and Pluto in 1930. 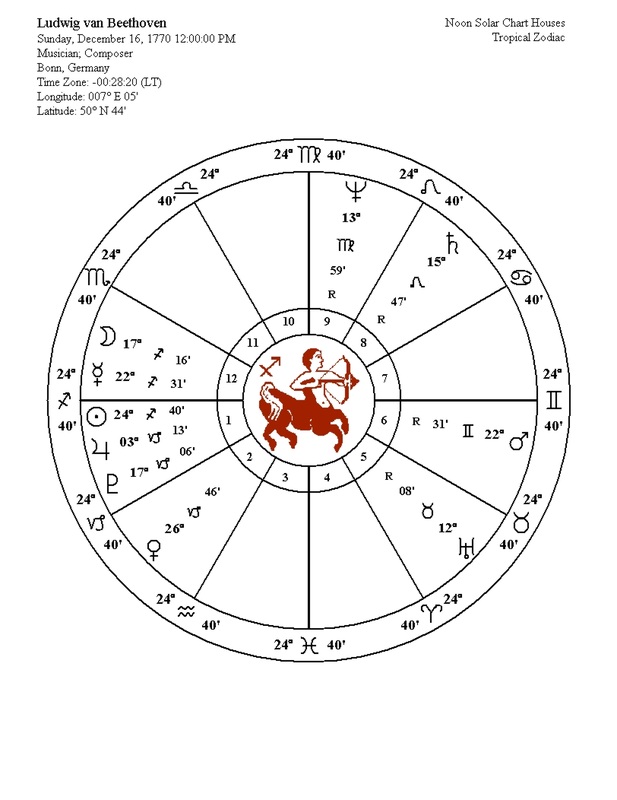 Next, we have the father of the theory of biological evolution, Charles Darwin:

Charles Darwin was obviously destined for great accomplishments; among the planetary aspects in his chart are: The Sun in trine aspect to Mars; The Moon in square aspect to Mars and sextile Jupiter; Mercury conjunct Pluto in trine to Uranus; Saturn, Uranus, and Neptune conjunct, and trining Venus; and Uranus conjunct the North Node. 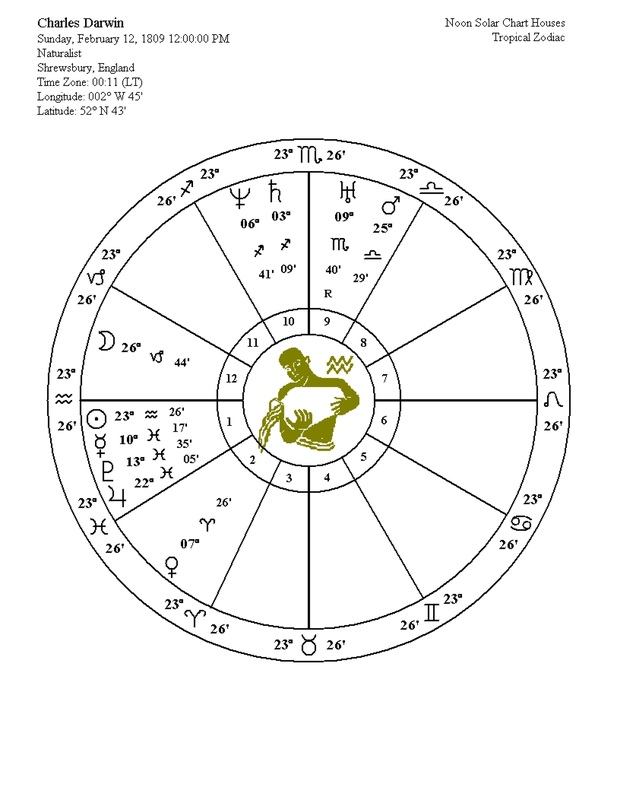 Next, we have the chart of the eminent American psychologist, William James:

James’ chart contains the following major planetary aspects: The Sun, Moon, and Mercury are conjunct, sextiling Uranus, and squaring Pluto; Venus, Jupiter, and Saturn are conjunct; and all three form a sextile to Mars. 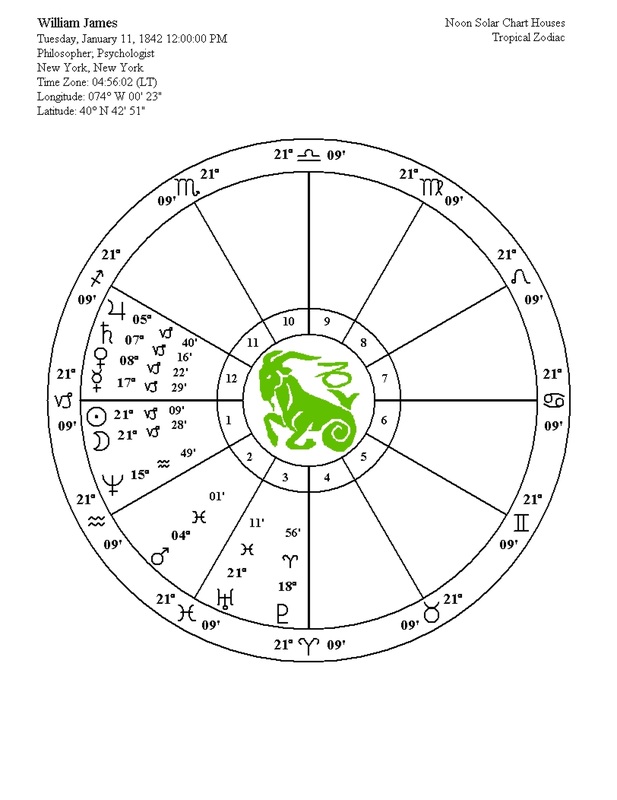 Next, the chart of the priest-paleontologist, Pierre Teilhard de Chardin:

Teilhard de Chardin’s is an extraordinarily focused chart, with: A conjunction of the Sun, Venus, Jupiter, Saturn, and Neptune all trining Uranus.  Notice, also, that the Moon, Mercury, Mars, and Pluto  make no aspects to other planets. 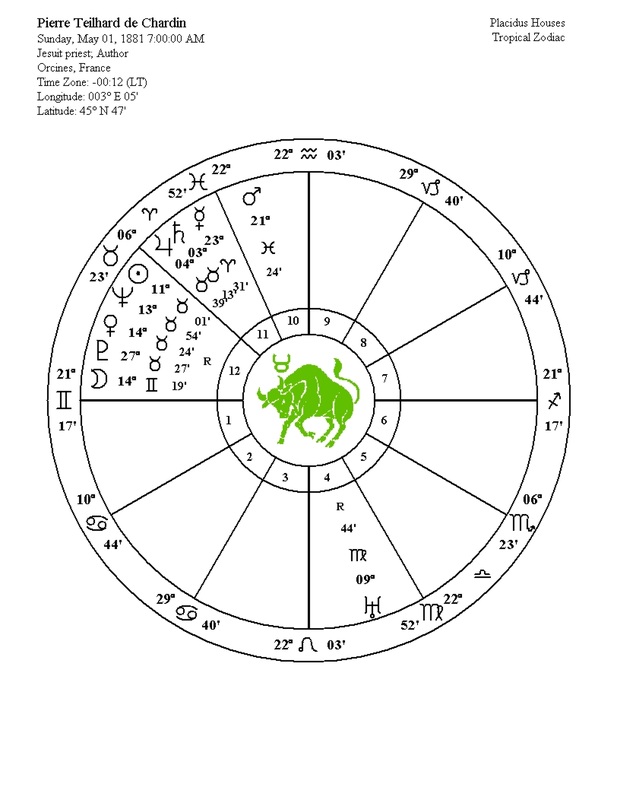 Another highly focused chart is that of storyteller extraordinaire, Franz Kafka:

Kafka’s chart contains the following major planetary aspects: The Sun is conjunct Jupiter; The Moon, Mercury, and Venus are conjunct and all in square aspect to Uranus; Mars is conjunct Neptune; and Saturn is conjunct Pluto. 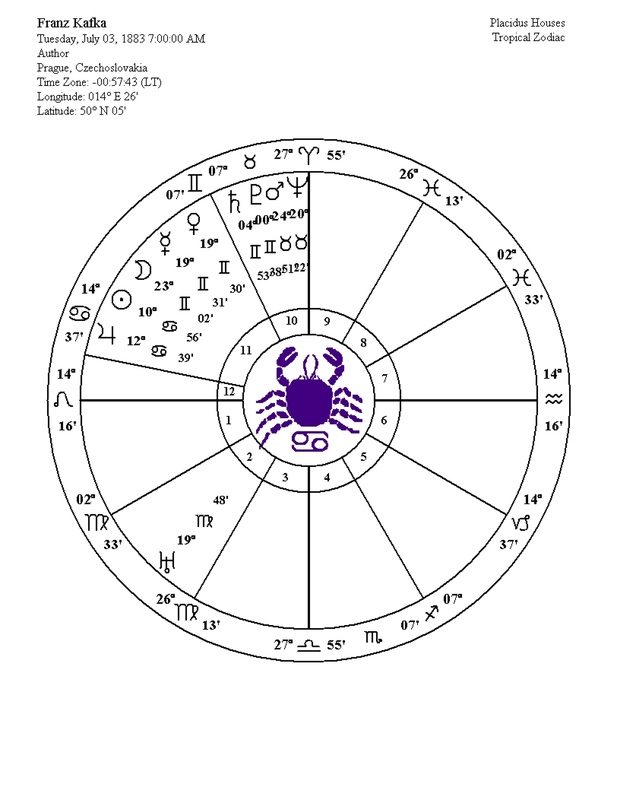 Our next chart is that of legendary physicist, Neils Bohr: 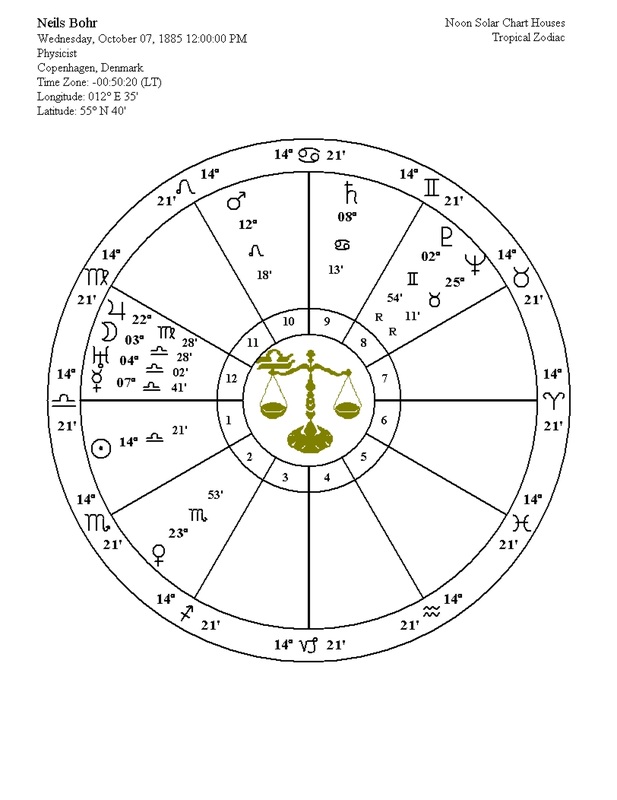 Next, we’ll look at the chart of Bohr’s co-revolutionary in physics, Werner Heisenberg:

Heisenberg’s chart contains these major planetary aspects: The Sun is conjunct Uranus, both of which are opposed by Pluto; The Moon is in square aspect to Mars; Mercury is sextile Venus; and Jupiter is conjunct Saturn. 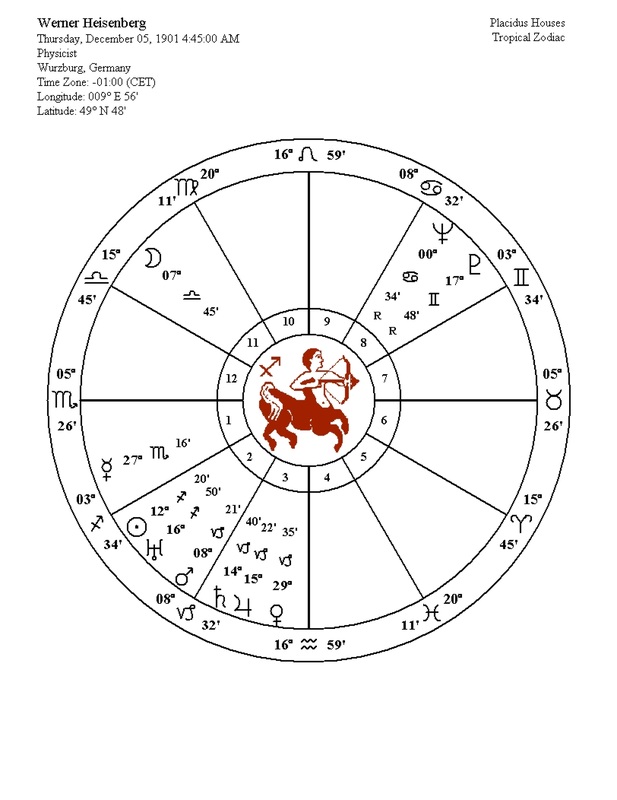 Next, as we reach contemporary times, let us have a look at the chart of evolutionary biologist and atheist theorizer, Richard Dawkins:

Richard Dawkins’ chart contains the following major planetary aspects: The Sun is trine Pluto; The Moon is sextile Jupiter and Uranus; Jupiter is conjunct Saturn and Uranus; Venus is in opposition to Neptune; Mars is trine Neptune; and Neptune is conjunct the North Node. 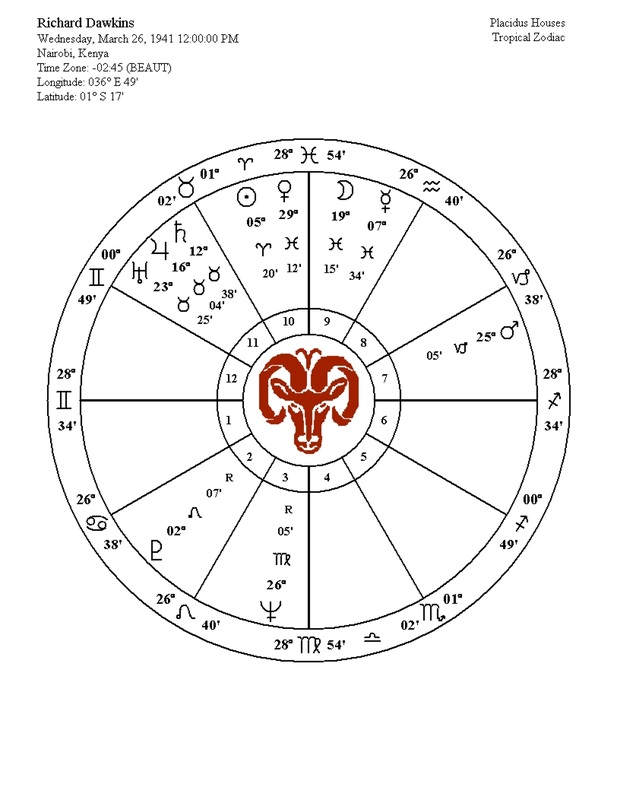 The next chart is that of renowned physicist and author, Stephen Hawking: 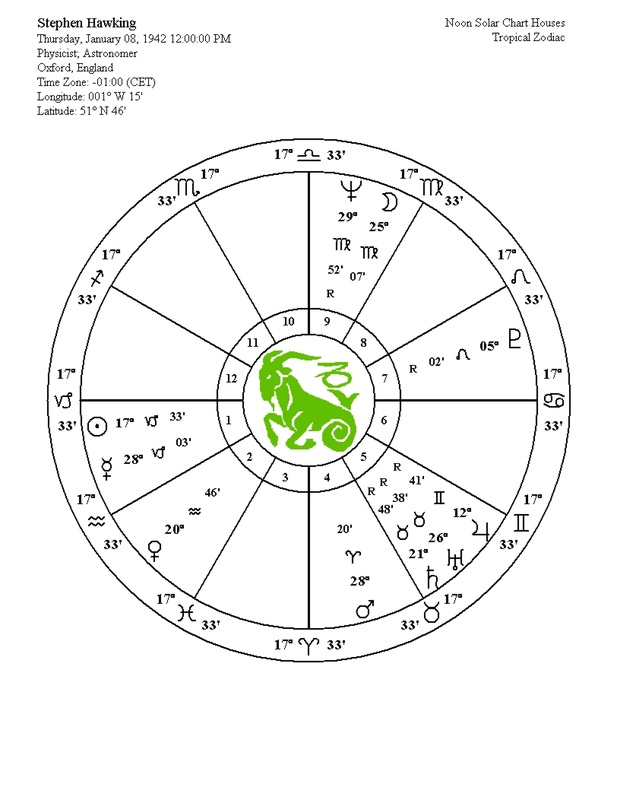 The following chart is that of the mystic-philosopher, Ken Wilber:

The following major planetary aspects appear in Wilber’s birthchart: The Sun is conjunct Mercury, and the two are trining Neptune and opposing Pluto; The Moon is sextile Jupiter and trine Pluto; Mercury is conjunct Mars; Venus is conjunct Jupiter; and Neptune is sextile Pluto. 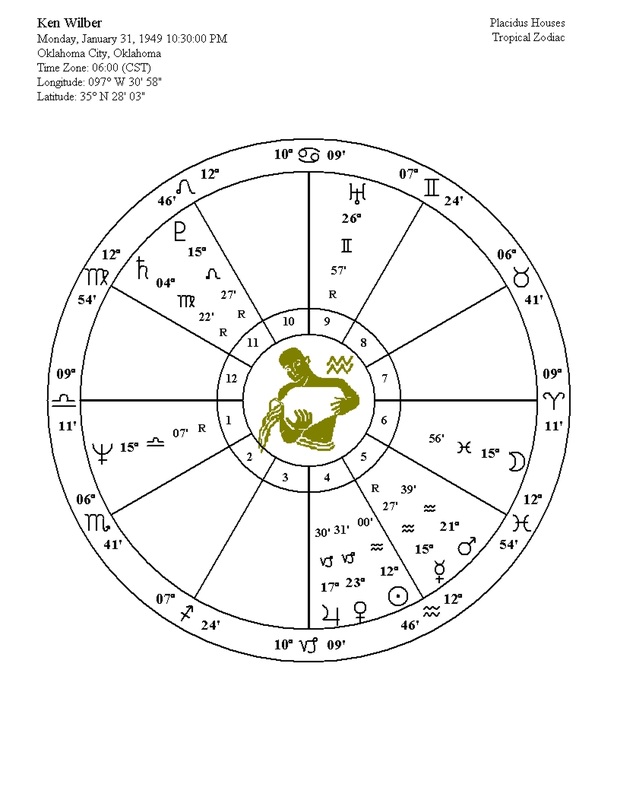 The next chart is that of astrologer and cultural historian, Richard Tarnas: 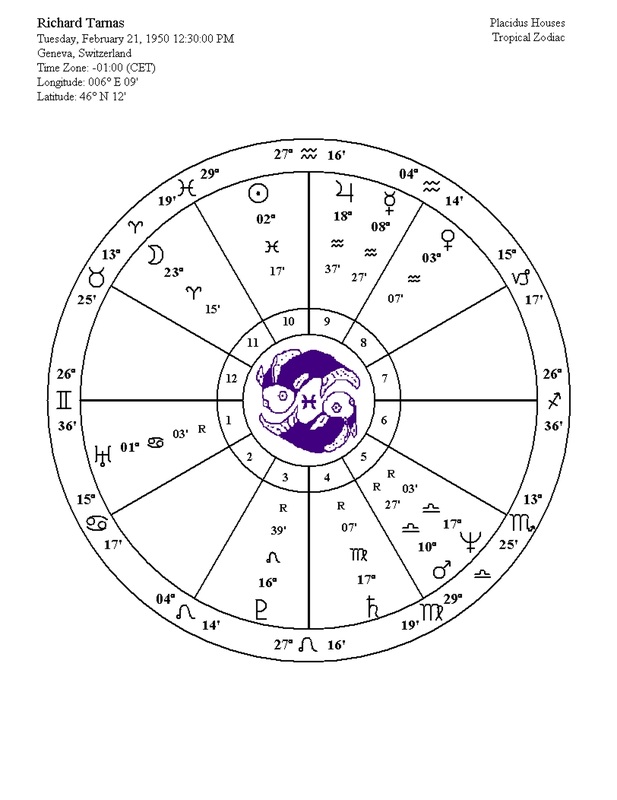 Next, is the chart of the charismatic spiritual leader, Mata Amritanandamayi: 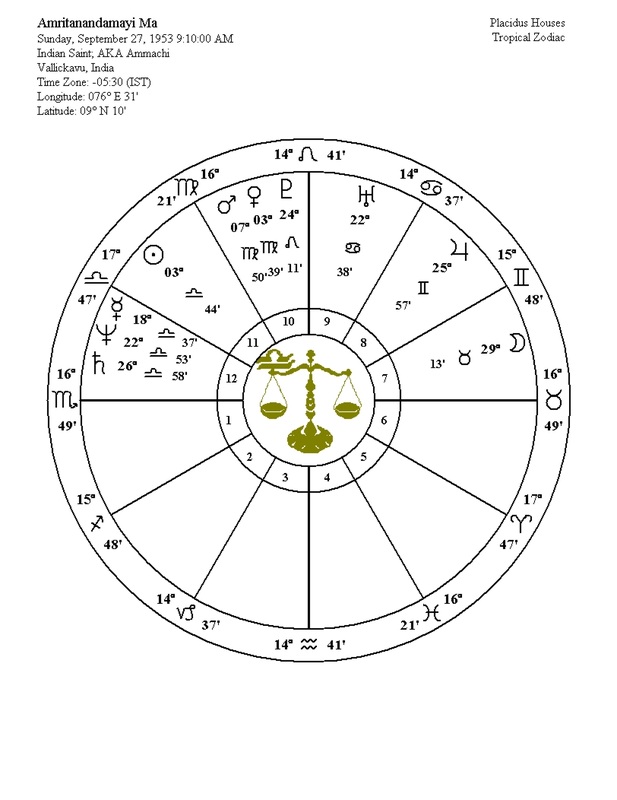 And now for the last of our eminent representative’s birthcharts: Here is the chart of software entrepreneur and philanthropist, Bill Gates:

And here are the major planetary aspects that appear in his chart: The Sun is conjunct Neptune, and square Uranus; The Moon is opposing Mars, and trine to Uranus; Mercury is conjunct Mars; Venus is conjunct Saturn; and Jupiter is conjunct Pluto. 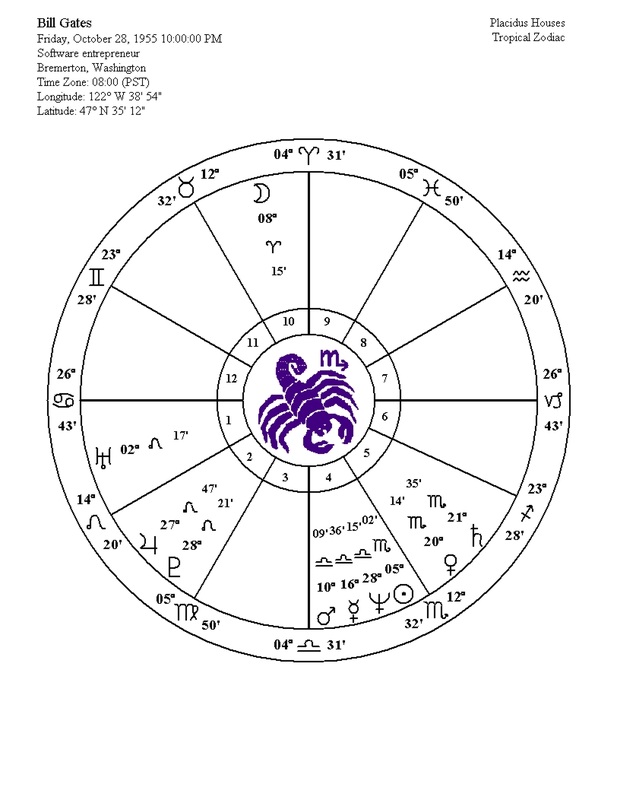 As in all of the other charts, I leave it for the reader to make his or her own in-depth interpretations; but in light of our knowledge of the lives and contributions of these very creative men and women, their charts speak volumes regarding the many harmonious as well as conflicting elements that make up their psyches. Above all, these charts provide abundant evidence of the soul qualities contained at birth in these individuals whose varied talents and proclivities have been revealed in the activities of their lives. The qualities of the soul come first; then come the actions that reveal those soul-qualities. As Heraclitus observed, “character is destiny”.

1.       All of the charts reproduced here were generated by the AstrolDeluxe  ReportWriter software by John Halloran, at www.halloran.com, and are used by permission.

2.       In this article, I have made little use of the Astrological signs; nor do I utilize or seriously regard the House cusps in any way.  My primary interest is in the aspects (angular relationships) made by the planets in the natal planetary maps.    It should be clear, therefore, that so long as I am consistent in my use of a particular Zodiacal format, the choice of Tropical or Sidereal is totally irrelevant; since one may translate back and forth between the two systems, and the aspects remain the same.

For those unfamiliar with the distinction between the Tropical Zodiac and the Sidereal Zodiac, the following clarification is offered:  Both Zodiacs are synonymous with the apparent path of the Sun (remember, it is the Earth that changes position, not the Sun; but the Sun appears from the Earth’s vantage point to move through 360° in the course of one year).  The Tropical Zodiac begins with 0° Aries at the point of the Vernal Equinox, the beginning of Spring; it is a season-based system.  The Sidereal Zodiac is based on the Sun’s apparent path through the actual positions of the star-constellations in the heavenly background; so that, 0° Aries is based on the apparent conjunction of the Sun with a Fixed Star in the constellation of the Ram, designated Aries by the Greeks over two thousand years ago.

At the time that it was so designated, around 2600 years ago, the Vernal Equinox coincided with the beginning of the constellation Aries; but since that time, due to the slight wobble in the Earth’s orbit, producing what is called “the precession of the Equinoxes”, the Vernal Equinox no longer coincides with the constellation of Aries, but has slipped backward into the constellation of Pisces.  In fact, today the Tropical Zodiac is about 24° off of the Sidereal (star-based) Zodiac.  When it comes to making interpretations based on sign positions, this is a crucial difference; and advocates of the Sidereal system (used in the Jyotish system of Vedic Astrologers in India and elsewhere) often make much of the authenticity of a star-based Astrology as opposed to a solar seasonally based system such as the Tropical Zodiac. But all this, as I mentioned, is quite irrelevant if, like me, you are only considering the effectiveness of the aspects produced by the natal planets and lights, which remain the same regardless of the Zodiac system.